The Kazakhstan School of Public Health (SHO) was established by the Decree of the Government of the Republic of Kazakhstan No. 1142 dated July 21, 1997 in Almaty in accordance with the Agreement between the WHO European Regional Office and the Ministry of Health of the Republic of Kazakhstan dated October 18, 1996. On November 18, 2000, the School of Public Health was renamed the “Graduate School of Public Health” (HSPH). The school was created with the aim of training and retraining specialists in public health, improving the qualifications of heads of health authorities and institutions on topical issues of public health, policy and management in modern conditions.

The Higher School of Healthcare is the first that kind of institution on the territory of the CIS countries and to this day remains the flagship in the field of new scientific knowledge, ideas and practical skills for heads of medical organizations of all levels, primary health care specialists, government officials of Kazakhstan and Central Asia, firmly holding a leading position in education and science in public health. 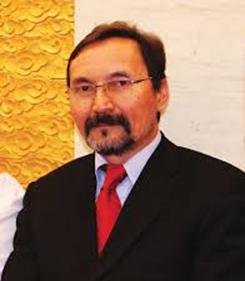 In 1972 he graduated from the medical faculty of the Karaganda State Medical Institute. After postgraduate studies in 1978, he worked as a research assistant, head of the department and laboratory for planning and forecasting health care at the Research Institute of Hygiene and Occupational Diseases.

From 1988 to 1990 he worked as Deputy Director General for Research at the Republican Center for Health Protection.

In 1992 he was appointed Deputy Minister of Health of the Republic of Kazakhstan.

Since 1997, the rector of the Kazakhstan Higher School of Public Health.

Since 1982 he is a candidate, and since 1993 as doctor of medical sciences, specializing in “Social hygiene and organization of health care”.
Since 1995 professor, has the highest category of health care organizer. Author of over 160 scientific papers. Under the leadership of M.K. Kulzhanov 10 doctoral and more than 20 master’s theses have been defended. All his professional activities are associated with the consistent improvement of the health care system, organization and management of health care in the Republic of Kazakhstan.

Kulzhanov Maksut Karimovich’s activity was devoted to the scientific substantiation of the need for deep transformations in the country’s health care system. With his direct participation, the main directions of the formation of new economic relations were developed during the transition of the healthcare industry to market relations; the implementation of compulsory health insurance and effective medical and organizational technologies for the management and financing of health care was managed. Being an active supporter of a scientific approach to reforms in healthcare, he applied his abilities as a healthcare organizer and teacher to create a School of Public Health in the republic. An agreement was signed between Kazakhstan and the WHO Regional Office for Europe to establish a School of Public Health. The dynamic development of the School of Public Health is characterized very positively. Over the past short period, the School has established many contacts with foreign partners, was admitted to the European Association of Schools of Public Health and its analogue, the Asia-Pacific Union of Public Health. Regional Office for Europe (WHO) departments consider the Higher School of Healthcare as their strategic partner not only in Kazakhstan, but also in the Central Asia region in general, and has trained more than 6,000 public health professionals. Along with short-term programs, 1-year certification and 2-year master’s programs have been successfully launched. The KSPH has been accredited by the European Agency for the Accreditation of Schools of Public Health. This is facilitated by his extensive experience in working with international organizations.

For a number of years, MK Kulzhanov, was a member of the Standing Committee of the WHO Regional Office for Europe, a WHO expert carrying out significant work in the framework of health policy in the European Region. Repeatedly represented Kazakhstan at various forums held by WHO and other international organizations such as UNICEF, World Bank, Asian Development Bank, etc. In 2000-2004. He was a member of the WHO Executive Committee, a member of the Board of COHRED, the Global Fund to Fight HIV / AIDS and Tuberculosis, and the UNEIDS Coordination Council. 2011-2017 Chairman of the Ethics Committee of the Ministry of Health of the Republic of Kazakhstan.

Currently he is a member of the WHO Executive Committee.

During her work as the rector of the Higher School of Health, she passed the national certification of the Ministry of Health of the Republic of Kazakhstan, became a member of the European Organization for Doctoral Education in Biomedicine and Health Sciences – ORPHEUS, and passed the preliminary international accreditation of the Master’s program of the Higher School of Health in Public Health by the decision of the Board of Directors of the European Agency for Accreditation of Educational Programs in the field public health (APHEA)

A quality management system has been developed and implemented in accordance with the requirements of quality standards ISO 9001: 2008 and has successfully passed the QMS certification.

Under the leadership of Zh.A. Kalmataeva prepared and defended 6 PhD theses, published more than 100 scientific publications.

Chronology of the emergence and development of KSPH:

• In accordance with the Decree of the Government of the Republic of Kazakhstan dated March 31, 2014 No. 280, the RSE at the RSP “Higher School of Public Health” was transformed into LLP “Kazakhstan Medical University“ KSPH ”, while maintaining the profile of activities in the field of postgraduate medical and pharmaceutical education, additional, professional.

• In December 2015. Kazakhstan Medical University “KSPH” received a certificate from the Ministry of Education and Science of the Republic of Kazakhstan on accreditation as a subject of scientific and (or) scientific and technical activities.

• In September 2017, the University entered into a cooperation agreement with the State Cancer Institute in Budapest, Hungary